For sale is a 1965 Ford Mustang Coupe located through our Indianapolis showroom. This 1965 Ford Mustang is nice both inside and out, and is sure to turn some heads and bring home some trophies on the car show scene. This 1965 Ford Mustang is powered by its rebuilt 289 CID V8 engine, backed by a C4 3-Speed Automatic Transmission, and running to a Ford 8″ rear end. The 289 V8 under the hood is believed to be the original engine to the car with around 3,000 miles on the rebuild and received some very nice upgrades that include Edelbrock Performer RPM Aluminum Heads and Intake, a Holley 4-Barrel Carburetor with electric choke, and a mild cam. Some other nice upgrades under the hood include: an Aluminum Radiator with an Electric Fan, MSD 6AL Ignition, Mallory Distributor, Ceramic Coated Headers, Chrome Alternator and Fuel Pump, and Aluminum “Cobra” Valve Covers. The C4 automatic transmission also received a rebuild and has around 1,000 on the rebuild giving you plenty of years of enjoyment. The exterior has been repainted in a 2001 Corvette Silver color and is accented nicely with GT “Hi-Po 289″stripes running along the bottom of the car. The interior is also been nicely redone in black and silver vinyl featuring front bucket seats with a center console and outfitted with new seat covers, carpet, door panels, dash cover and headliner. Some other nice interior options include: Rally Pack Gauges housing a clock and an Autometer Tachometer, Under Dash Aftermarket Temp, Oil, and Volt Gauges, Moto-Lita Steering Wheel, Lighted Door Sill Plates, and Blue LED Dash Lights. The stereo system was also upgraded and sounds awesome with a Custom Autosound AM/FM In-Dash Receiver with a Pioneer 6 Disc CD changer mounted in the trunk and running to a Sony 600 Watt 4-Channel amplifier powering Infinity speakers in the kick panels and a subwoofer in the trunk. This Mustang has an awesome lowered stance and looks great with Magnum 500 wheels wrapped in BF Goodrich Radials measuring 205/60r15 in the front and 215/60r15 in the rear. The options on this 1965 Ford Mustang include: AM/FM Radio with 6 Disc CD Changer, Power Antenna, Power Brakes (Front Disc), Vinyl Interior, Rally Wheels, Raised White Letter Radials. If you are in the market for an iconic classic car that sounds and drives as good as it looks, here it is.

Gateway Classic Cars of Orlando is proud to offer present this 1969 Ford Mustang Coupe! By the late 60s Ford's Mustang was still hot to trot and sales were boom... 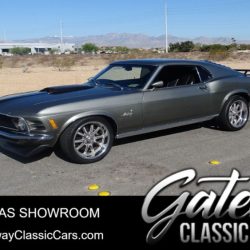 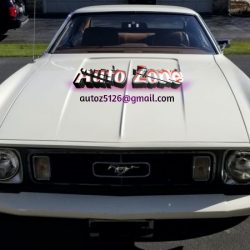 Only 3 owners during this nearly 50-year old beauty’s life. The original 302L engine only has 41,000 miles on it. 3-speed manual transmission.