Gateway Classic Cars of Atlanta is proud to present this 1967 Ford Mustang. The first-generation Ford Mustang was manufactured by Ford from March 1964 until 1973. The introduction of the Mustang created a new class of automobile known as the pony car. The Mustang’s styling, with its long hood and short deck, proved wildly popular and inspired a host of competition. It was initially introduced on April 17, 1964, as a hardtop and convertible with the fastback version put on sale in August 1964. At the time of its introduction, the Mustang, sharing its platform with the Falcon, was slotted into a compact car segment. The red vinyl interior compliments the Wimbledon White paint well.
Options on this 1965 Ford Mustang include: AM/FM Radio, Seat Belts, Aluminum Wheels, Vinyl Interior, and Radial Tires.

Gateway Classic Cars of Dallas is proud to offer this sharp 1966 Ford Mustang. Walking around this proud pony you will notice the chrome bumpers, 14” chrome hub... 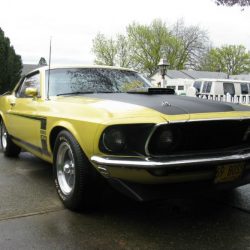 This 1969 Boss was built in the first week of production (half year model). The mileage is original and so is the paint. It looks stock, but every major system ...