Gateway Classic Cars of Atlanta is proud to present this 1986 Ford Mustang LX SSP. The Mustang Special Service Package began as the Mustang Severe Service Package in 1982. In fact, the SSP Mustang was pioneered by the California Highway Patrol (CHP). When the CHP welcomed the Mustang into service, it had a four-barrel 5.0L with a four-speed transmission in a compact two-door sedan package. A deal closer for the CHP was the Mustang’s reliability and price–less than $7,000 per unit, making the Mustang an feasible value for California taxpayers. Of course, they soon came to dread seeing a CHP Mustang in their rearview mirror. The most significant improvements began for the ’86, with steady development through the end of production in 1993.It’s important to note that the SSP Mustangs weren’t conceived using off-the-shelf parts. Many components were developed specifically for Special Service use, some finding their way into other heavy-duty applications outside the Mustang carline. When 5.0L Mustangs received sequential electronic fuel injection for ’86, so did SSP Mustangs. This made the 5.0L H.O. even faster and more reliable. Not all Special Service Mustangs were stark creatures with taxicab interiors. Some had creature comforts such as power locks and windows, an AM/FM stereo, a tilt wheel, reclining seats, and more. How Special Service Mustangs were ordered depended upon destination, purpose, and agency. Not all of them were police cars. Some were for fire departments and other government agencies. They were also used in the FBI, DEA, and U.S. Air Force, which used them to support U-2 spy plane ground activities. Powering this 1986 Ford Mustang LX SSP is a 5.0 liter backed by a T-5 transmission. Owner states this vehicle was originally ordered for Arvada, CO Police but was never used in duty. Owner states this to be a two-owner vehicle.

This 1986 Ford Mustang LX SSP is being offered by our Atlanta Showroom and can be seen in greater detail including 100+ HD pictures and an HD video at http://www.GatewayClassicCars.com. For additional information please call our knowledgeable staff at (678) 894-4833 or email us at Atlanta@GatewayClassicCars.com or come to our Atlanta Showroom, located at 1870 McFarland Parkway Suite 300, Alpharetta, GA 30005 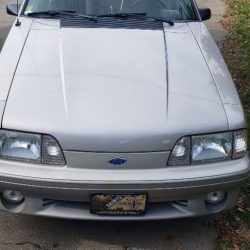 Relive the glory days of the mid 80's with this breathtaking example of Fords notorious, long lived - third generation Mustang that we all know as the “Fox Body...

Gateway Classic Cars is proud to present this very clean 1988 Ford Mustang LX. Under the hood is a healthy 302 cubic inch V8 mated to a 5-speed manual transmiss...