Gateway Classic Cars of Louisville is proud to present this 2007 Ford Mustang Shelby GT/SC! Never heard of a GT/SC? You probably aren’t alone. You could order or buy a Shelby GT from a dealer. But if you wanted the GT/SC(Supercharged) package you had to send your Shelby GT back to Shelby America to get the upgrade, and the GT/SC package was more powerful than the mighty GT500! Near the end of 2010 this Shelby was shipped to Shelby American Motorsports aka “The Speed Shop” in Las Vegas, NV. This pony was not just set to receive the GT/SC package, but even more upgrades that most never had. The staggering amount of upgrades and accessories added by Shelby after the initial point of sale exceeds $22,000! Lets get into the meat and potatoes. A Shelby Whipple M-6066-M118 Supercharger sits atop the 4.6L V8 pushing the power up to 550hp! Power is ran down through a 5-speed manual gearbox. She runs and drives very well and has a great exhaust note! She received Baer slotted rotors and pads in front and rear. Also installed was the Shelby GT Interior Upgrade, shifter boot, ebrake boot, arm rest cover, Shelby Aluminum Driveshaft, Shelby Turbo Mufflers, Shelby “Deep Draw” Hood, Shelby KR Spoiler, Shelby 3.73 rear gears, Sequential Tail Lights, Shelby Stripes and Inserts, and more. The black paint looks sharp and the black leather interior looks inviting and is in great shape. These Shelby’s are rare and this one even more so with everything it received. We have the Shelby Invoices showing the installed items. The current owner acquired it from a personal friend of his and wants it to have a good home. The title is clean and clear and ready to be transferred into your name now! The Carfax is clean with no accidents. Originally a Florida car and worked its way up to Kentucky where it has been the majority of its life. Don’t miss your chance to have this rarely seen pony! Options on this Shelby are: A/C, Power Steering, Power Brakes, Power Windows/Locks/Seat, Leather Interior, Cruise Control, AM/FM/CD Radio, Custom Wheels, and Performance Tires. This 2007 Ford Mustang Shelby GT/SC is offered by our Louisville Showroom and can be seen in greater detail including 100+ HD pictures and an HD video at http://www.GatewayClassicCars.com. For additional information please call our knowledgeable staff at (812) 294-1555 or email us at louisville@GatewayClassicCars.com 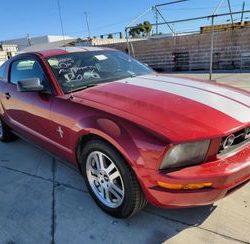 Gateway Classic Cars is excited to present this 2008 Ford Mustang Roush 427R. The Mustang has become on of the iconic cars that were ever produced. The Mustang...

Gateway Classic Cars Ft. Lauderdale is excited to offer this Elegant 2007 Ford Mustang Shelby GT. The philosophy, process, and hardware of how a Mustang GT beco...