Gateway Classic Cars of Atlanta is excited to offer this 2015 Ford Mustang GT, complete with the 50th Year Anniversary Package! The Mustang is a muscle car that has remained true to its heritage and has stood the test of time. The 2015 Mustang GT 50th Anniversary Edition package was debuted on April 17th at the 2014 New York International Auto Show, in the same fashion as its predecessor some 50 years prior. This 1-owner Golden Anniversary Edition GT is spectacular showing just over 500 careful miles on the ODO! The loaded-up package was limited to just 1,964 units produced, making this a very desirable car to own. It is suited well finished in stunning Wimbledon White paint complimented by Limited Edition Cashmere leather. The 50 Year Limited Edition wears a unique grille with the running pony in the paddock and a set of thin horizontal trim pieces running through the grille all finished in bright chrome. There is another subtle chrome treatment applied to the new tri-bar LED taillights along with a chrome piece that runs around the top edge of the side window glass. Another attention to detail is the uniquely louvered rear quarter windows, rather than a piece of painted fiberglass to cover the windows. Under the hood of this pony sits a beefy 5.0 V8 backed by the desirable, super-smooth 6-Speed manual transmission.

Gateway Classic Cars of Scottsdale is thrilled to present this epic 2018 Ford Mustang Shelby GT350R for sale on consignment with our Arizona showroom, located i... 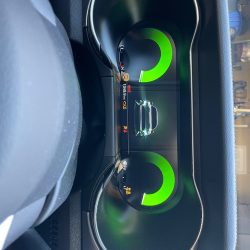