Gateway Classic Cars Milwaukee is excited to present this 1966 Ford Mustang. The Mustang has been a phenomenon since its introduction in 1964. Considered Fords longest running production car as the nameplate is still used today. With over one million units sold in the first two years the Mustang is truly an American success story. Leading competitors were quick to get into the pony car craze including the Chevrolet Camaro, Pontiac Firebird and AMC Javelin.
This 1966 Ford Mustang comes with the desirable 289 cubic inch V-8 attached to a four-speed manual transmission. The Hurst shifter makes this this car one fun driver. The Cragar chrome wheels, stripe package and optional fog light package gives this pony a sporty appearance. Painted in light blue with a coordinating blue / white vinyl interior. Added interior features include embossed ponies on the bucket seats, wood steering wheel and wood dash panels. Options include power steering, front disk brakes, AM /FM/8-track, and an aftermarket tach.
Now is the time to become part of the millions of Mustang owners who have experienced the” pony” legacy. Don’t let this sporty 1966 Ford Mustang slip through your fingers.

Gateway Classic Cars is proud to present this 1971 Ford Mustang Boss 351 for sale at the Milwaukee Showroom. While the Mustang has made its way among the afford... 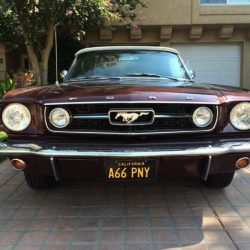 You are looking at a low production, high horsepower, choice optioned and factory correct example of the car that captured the hearts and minds of America’s aut...

Gateway Classic Cars of Philadelphia is presenting a 1969 Ford Mustang Race car for sale. This 1969 Mustang is powered by a 428 engine with a C4 reverse valve b...