Gateway Classic Cars Milwaukee is excited to present this 1964 ½ Ford Mustang convertible. The Mustang has been a phenomenon since its introduction in 1964. Considered Fords longest running production car as the nameplate is still used today. With over one million units sold in the first two years the Mustang is truly an American success story. Leading competitors were quick to get into the pony car craze including the Chevrolet Camaro, Pontiac Firebird and AMC Javelin.
The earliest Mustangs are denoted as 1964 ½ models by enthusiasts but were given 1965 vehicle identification tags. This Ford Mustang convertible is painted in bright red with a matching red vinyl bucket seat interior. A white convertible top, brilliant chrome bumpers and wire wheel covers add to the car’s sporty good looks. This U code model has a 170 cubic inch straight six under the hood attached to a three-speed manual transmission. Comfort features include a manual convertible top, sport steering wheel, seatbelts and an AM radio.
Lee Iacocca probably never envisioned that the Ford Mustang would become one of the most iconic vehicles ever produced in the history of the automobile. Just think, this 1964 ½ Ford Mustang convertible was one of the first models built in a legacy of Mustangs that are still being manufactured almost six decades later.

Gateway Classic Cars of Atlanta is proud to present this 1972 Ford Mustang. The Ford Mustang is a series of American automobiles manufactured by Ford. In contin... 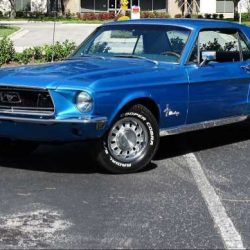 This 1968 Ford Mustang. When you say “America” you think Apple Pie, Baseball, Ford Mustang. With an abundance of factory options, packages and engine choices th...