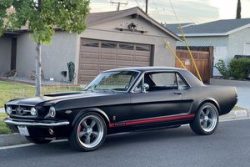 1965 Ford Mustang GT Hardtop rolled off the San Jose line in Springtime Yellow, powered by a 289-4V small-block engine. It has since undergone a restomod makeover, includes a 347 stroker engine, chassis and suspension upgrades, Wilwood front disc brakes, 18-inch Torq Thrust II wheels and much more. The work on the car was reportedly finished recently and the car is said to run well. Under the hood is a 347-cu.in. stroker engine that has less than 1,000 miles on it. Some of the performance equipment on the larger-displacement Windsor includes an Edelbrock aluminum intake manifold that’s topped with a Holley 770-cfm Street Avenger carburetor, an Edelbrock aluminum water pump, an MSD distributor, and Dougs headers. “The engine doesn’t smoke on start-up or when it’s warm,” there are no leaks with the powertrain. The engine is also said to run cool, thanks to a thick, three-core aluminum radiator. It’s paired with “recently rebuilt” C-4 three-speed automatic transmission that reportedly shifts well. Additional drivetrain features include a Ford Racing aluminum driveshaft and a Traction Lok rear axle with 3.55 gears. The exterior of this restomod pony car was reportedly just redone and the work included replacing the floorpans to cure the body of rust and installing a Scott Drake Shelby-style hood. It was then sprayed in matte black primer and clearcoat to give it a distinctive, street-tough look. there are no blemishes in the new finish. The glass is also in very good shape, with no cracks in the windshield, The seals, however, are said to be old and “dried up.” a set of replacement seals that go with the car. All the exterior lighting is reported functional. In contrast to the powertrain and exterior, this Mustang’s black vinyl cabin is largely in stock condition, It is in good-appearing condition, including the pony-style seat covers, The carpet and headliner are also said to be in good shape, with no sagging in the headliner. All the interior trim is reportedly intact, the heater and gauges are functional, including new Auto Meter instruments.

Gateway Classic Cars of Louisville is proud to present this 1965 Ford Mustang! In the mid 60’s Ford developed and released a car that would become one of the lo... Gateway Classic Cars of Fort Lauderdale is proud to present this 1973 Ford Mustang Mach 1. When it comes to classic cars, nothing turns heads like a Mustang. Fi...

Other items listed by AutoZone